My flight was at 6AM from Bandung to Makassar. I brought two slices of wheat bread because I knew I would starve during my 2h flight. I fell asleep immediately after I was seated. I didn’t realise if my plane had taken off nor I heard the attendants coming. I woke up in the middle of my flight to take a few bites of my breads, then got back to sleep.

Pimo, a friend of mine who worked in Makassar and the reason why my friends & I came here, picked me up at the airport. She found me grumbling on how starving I was. “OK, we pick Rina and Rara up, then we’ll have Sop Saudara. You have no objection of eating beef in the morning, right?” said Pimo calmly. I nodded immediately and said loudly, “I WANT ALL THOSE MAKASSAR AUTHENTIC CUISINES. YEAY!” I barely had heavy breakfast, but this time I wouldn’t say NO. Little I knew, I shouldn’t had said that because I could barely escape from beef here in Makassar. You’ll know why.

Our first stop was Sop Saudara, it’s originally from Kabupaten Pangkep, a nearby regency in South Sulawesi. I was expecting Coto on my first day but Pimo recommended us to try this first. I saw a milkfish being grilled outside the restaurant so I was expecting a seafood soup. I screamed happily knowing we were going to eat seafood (I am an avid seafood lover) only to caught in confusion when Pimo asked which soup I wanted.

“So what’s with those fishes outside?” I asked Pimo. She answered, “we’ll eat our beef soup with grilled fish, Nab.” 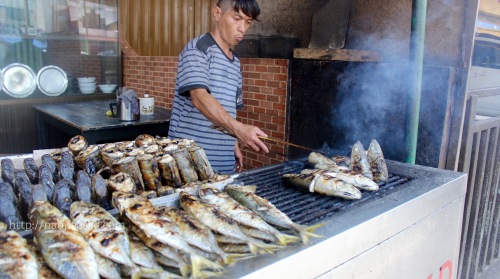 I asked the chef to pose and here it was

You can choose a Sop Saudara with either beef, viscera, or mixed. Pimo & I chose a mixture of beef and cow’s lung, meanwhile Rina and Rana chose mixed of viscera and beef. A waiter served us our soups, grilled fishes, white rice, and (thanks God) glasses of cold mineral water. Makassar was terribly hot when I first came out of my plane. 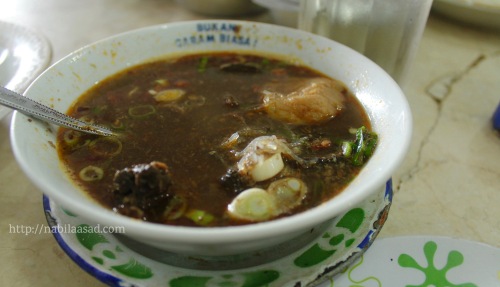 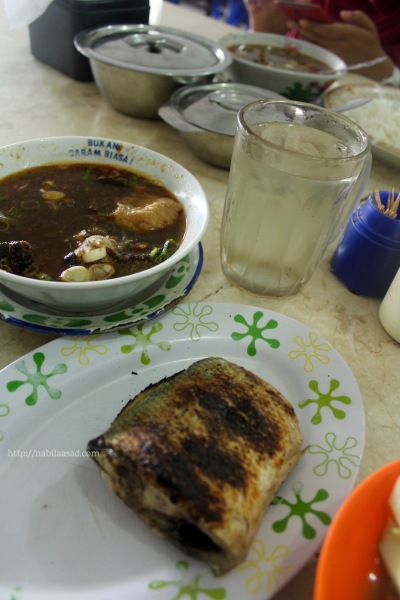 It was strange at first because like what Pimo said, the locals I met there were eating Sop Saudara with grilled milkfish. Our first bite of the grilled milkfish was unforgettable. I saw the chef didn’t add any seasoning except salt and oil, yet its taste remained fresh and didn’t smell fishy. We suddenly fell in love with the milkfish.

Rina and I tried to identify which seasonings were added into the soup. I could taste a strong nutmeg from my soup. Being curious of Sop Saudara recipe, I googled about it. I found out that the name Saudara means that everyone who meets while eating the soup could be like saudara–families (source).

It is another beef soup, but with ribs. This time we wanted to try the legenday Konro Karebosi. It has several branches in Java Island but I never had one before. We went to the main restaurant of Konro Karebosi located near the Karebosi Stadium. A stadium? Yup! The name Karebosi was taken from that stadium.

This konro soup was firstly made famous in the 60s when a teacher namely Hanafing opened the first konro stall in the area of Karebosi stadium. It didn’t take longer time for its tastiness became a huge hit after 8 years (source). 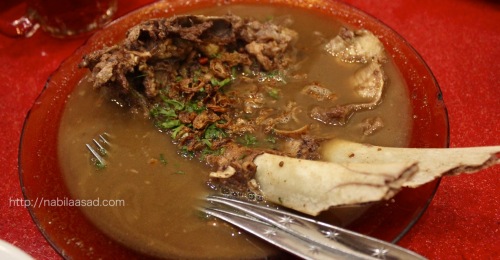 When we entered the restaurant (located in a small small alley), the waiter directly asked our orders. We came there without Pimo so we stared at the waiter blankly. “Could we ask for the menu first?” asked Rina. “We only have Sop Konro and Konro Bakar (the grilled one),” the waiter answered in her poker face.

“OK then, we want 2 Sop Konro and one Konro Bakar.”

Sop Konro came first and as expected, it was beef ribs covered with broth. I took a sip and started comparing it with Sop Saudara that we had earlier. I commented, “hmm… I love Sop Saudara’s broth better. But its meat is more tender than the one of Sop Saudara.”

Konro Bakar: Grilled Ribs and a bowl of beef broth

Ten minutes after, our Konro Bakar came. I expected Konro Bakar to look like Bandung’s Iga Bakar Sijangkung. I found a plate of ribs covered with peanut sauce. And surprisingly, it was also accompanied with an additional bowl of beef broth. Since the waiters weren’t that friendly, we looked around to other tables to figure out how to combine Konro Bakar with the beef broth. We thought it was kinda strange mixture to have both. Several guests cut the grilled ribs then pour the beef broth before eating it. So we followed them. After a few bites, I decided to ignore the beef broth :p

PS. a portion of Konro could fit for two (female) portions. Just remember you eat this for dinner.

We went to a local market in Maros (Pasar Maros) at 8.30 AM on Friday. Pimo recommended us to have our breakfast at Coto Dili next to Pasar Maros. When we arrived, the restaurant was still closed so we looked for another option inside the market. We didn’t find any then we decided to call the restaurant owner. “How come a breakfast restaurant hasn’t opened at 8AM? Maybe locals eat Coto for lunch instead of breakfast,” that’s what I thought.

A lady picked my call and said, “We are open now. Just wait a minute, I’m on my way.”

It was my first time eating Coto. For me, its taste was a bit similar with a beef Soto Betawi, only that we ate Coto with ketupat, rice wrapped in a woven palm leaf. Pimo told us if Coto Dili was originally from Kabupaten Maros, half-hour ride from Makassar, while the one originally from Makassar was Coto Makassar. Since I haven’t tried Coto Makassar, I didn’t know the difference in taste. Both look similar on picture.

I had more than enough beef during my 5D4N stay in South Sulawesi. That’s why I stopped trying other beef soups there. For the first time in my life, I missed eating my boiled veggies so much, haha. Anywaaay, those three are must-try’s when you are in town. A friend also recommended another beef soup called pallubasa. I’ll keep that in mind for my food-hunting on my next visit then.